Update from Zonelle – We Will See Miracles

Almost 11 months after the FIRST transplant, an infection attacked that cornea. The doctors had no answers as to why it happened; it was just something no one had any control over. And it was very disheartening that, once again, I needed to walk this difficult road of another transplant and a long recovery period.

But thanks to the prayers of our wonderful partners and friends and family, this second transplant healing and recovery has been very different than the first. In less than six weeks from the operation, I am ACTUALLY beginning to see people and things up close. This is something that never happened after the first transplant.

I AM NOW ABLE TO SEE DWIGHT UP CLOSE FOR THE FIRST TIME IN OVER 2 YEARS!!

This morning when I woke up, my heart was overwhelmed with gratitude and thankfulness for what God has done through this two-year journey. I am not completely to the end, but I can SEE the end.

I am so happy and grateful to God for His faithfulness, and to you who have stood with us through this uncertain and life-changing journey. God is answering prayer, and I am believing for complete eyesight in the very near future.

Your diligence in standing with us has meant more to me, than I could possibly express. And from the bottom of my heart, I say “Thank you!”

Dwight and I want to stand with YOU on any need you or your family are facing. We strongly believe in agreeing together in prayer. Matthew 18:19: “If two of you on earth agree about anything they ask for, it will be done for them by my Father in heaven.” Psalms 46:1: “God is our very present help in time of trouble.”

As we continue to stand together in prayer, we WILL see miracles!

God bless you, and I love you,

Special Christmas Offer for You! 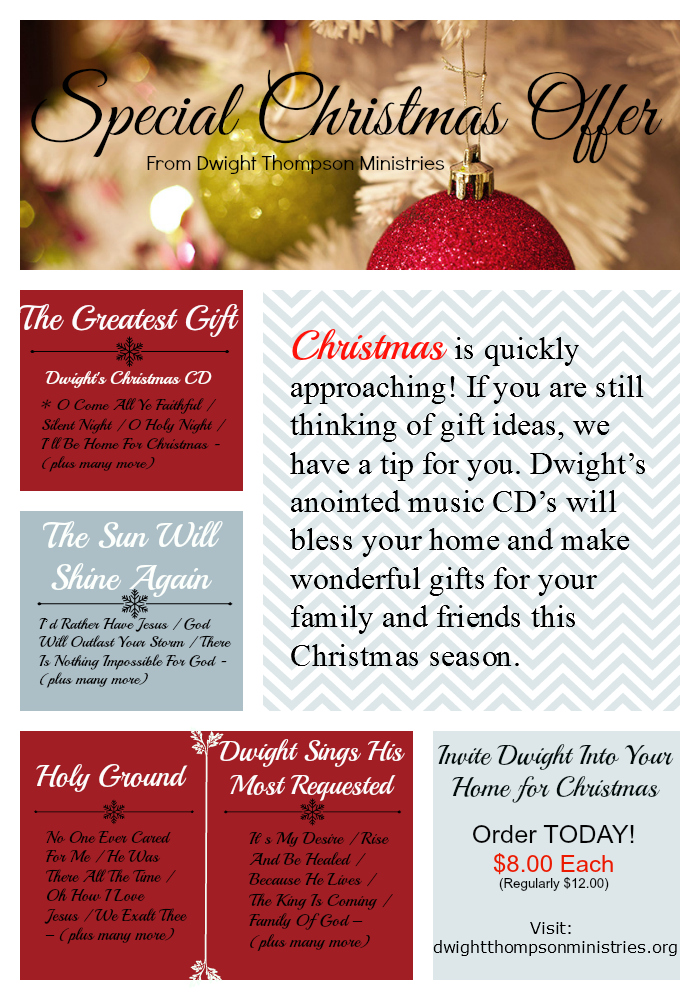 A New Name Welcomed Into The Thompson Family

July 14, 2012, The Beautiful Union of Austin and Savannah Thompson

We were so excited, as we sat at the wedding of our grandson, Austin Thompson, on Saturday, June 14, 2012.  We couldn’t help but remember the miracle of the beginning of his life 28 years ago. He was born at 3 months premature and he weighed only 3 lbs, then lost down to 2lbs 10 oz.  The doctors told us, IF he lived, he would be physically and mentally impaired. Despite the negative medical report on him each day, we kept believing for a miracle and quoting scripture over him daily.  Today, Austin is in perfect health both physically and mentally… and is an avid triathlon and marathon athlete. “With men it is impossible, but with God all things are possible.” (Matthew 19:26)  We have always prayed for our grandchildren and their future mates in life, and we are so happy that God chose Savannah and brought her into Austin’s life.

Our granddaughter, Alexa, (Austin’s sister), who is the media relations associate at Samaritans Purse, is going to share with you the moments of that beautiful day.

As Austin’s little sister it is my duty to share a little bit about my brother and new sister-in-love. First, I need to tell you how Austin and Savannah met. For many of you who know Austin and Savannah, there is no doubt that God designed them specifically for each other. In a very humble voice, I am proud to say that by God’s will, I was used to introduced Austin and Savannah. Savannah and I became very good friends through The Well, our college and career ministry at Harvest Christian Fellowship.

Looking back now I don’t know how Austin and Savannah did not meet earlier, realizing that Savannah and I were very close friends for over a year before they started dating. Through varias church activities Savannah and I spent a lot of time together. One night there was a missions convention not to far from were we lived. My cousin Ashley Greer, who works for Global Passion Ministry, was visiting So Cal to host a booth at the conviention. My brothers wanted to go with me to see my cousin Ashley and like many nights, Savannah and I planned to hang out, so off we all went to the convention.

A few times that night I noticed Austin talking to Savannah and it was as if the Lord had opened my eyes to his beautiful plan. As a sister I always dreamed of my brother marrying one of my friends but I never thought that would become reality.

I reflected back on many conversations my brother and I had about his “Dream Girl”. Through out the night I was reminded about those late night conversation’s with my brother and realized that Savannah met many of Austin’s prayers in a wife.

That night we took a group picture where Savannah just so happened to be standing next to Austin. That was exactly the moment that started it all. I zoomed my camera in to just the two of them and joked with Savannah about how cute there kids would be one day.  The good friend she is, she laughed and told me she has never thought about Austin in that way, that she has always seen him as her friends big brother (That was an answer to prayer for me because many girls tried to become my friend to try to date my brother). Later that night I started dropping the same hints to Austin. It was not long after that night that Austin started pursing Savannah. And 2 ½ years later, on July 14, 2012, they became Mr. & Mrs. Austin Thompson.

Austin and Savannah have endured many trials during their time dating. What the enemy meant for evil God used for good. I love my older brother and respect his hard work and determination more than words can describe. Our entire family has prayed and dreamed of who Austin’s wife would be one day. We are so blessed to have Savannah be apart of our family. Austin and Savannah’s wedding was a reflection of their obedience to God and love for each other. It was truly a day that honored and glorified the Lord.

There are no words to describe how beautiful and perfect their wedding day was. So, I will let Austin and Savannah tell you a little bit about their big day themselves.

A word from the Bride, Savannah.  “My heart was racing from the moment I woke up. I knew July 14, 2012, was going to be the best day of my life. Friends and family surrounded me all day before the ceremony as I prepared to take my vows. The entire day was full of joy and blessings knowing that I was going to marry the love of my life. When it came time to walk down the isle, I was more than ready. I can’t begin to describe how I felt when I saw his face; there was no way I was going to take my eyes off him. He looked wonderful. I was overwhelmed with God’s grace as I was reminded how He has brought us together.

We are so blessed and humbled by the love and support from our family and friends. We are very fortunate to have so much love all around us and know that the Lord will be with us always. I pray that as we live this new journey together we can do everything as unto the Lord. Austin and I have many things in common but the most important is our love for Jesus Christ and striving to live our lives for His glory!”

The Groom Austin, “I wanted my wedding to glorify the Lord in every way.” Said Austin. “Savannah and I had been through a lot together leading up to that day, much more than your average couple prepped to get married. Through the adversity and trials we held onto God’s promises and experienced a deeper love and growth in our relationship with Jesus and each other.

So, our wedding day was a celebration. A party to honor the Lord and praise Him for who He is and what He has done in our lives. It was an emotional day to say the least but more on a joyous level. I was so nervous all day, but the moment I saw Savannah at the end of that isle everything else faded away. In that moment, the Lord opened up the heavens and His glory came raining down on us. From that moment on, through the excitement and tears, we had the best day of our lives with our families and friends.

I am an athlete and have been competing in endurance races. My training is demanding and very hard. Many days I don’t feel like putting in the time and I am too tired to put for the effort, but I choose to lace up my shoes and get on the trail because I know if I don’t I will pay for it…Savannah and I are running this race of life together now. The training has been difficult and taxing, but I know it will pay off when we get into those later miles of life’s race. Our wedding day was the starting line and the gun went off. Now we are holding on to God and His truth. We will endure in His strength. Psalm 27:13-14. To God Be The Glory Forever! Amen!”

Mark 10: 6-9 “But at the beginning of creation God made them male and female. For this reason a man will leave his father and mother and be united to his wife, and the two will become one flesh. So they are no longer two, but one flesh. Therefore what God has joined together, let no one separate.”

Episodes of Praise the Lord

Watch the latest epsisodes of Dwight Thompson hosting Praise the Lord on TBN.